My daughter likes to regularly scout for home decorating ideas on the internet. She got very excited after seeing several examples of artwork arranged in Salon style on the wall behind one’s TV screen. Salon style means lots of artwork hung close together top to bottom and side to side. The idea is to balance out the visual weight of the TV with the artwork behind it.

It’s a fine contemporary idea, but rather a daunting task, (even for a small wall), especially if you run it by your husband, as your chosen helper for said task! If he were the sort of husband that excels at aesthetically arranging the towels in the closet, then maybe. He is not that sort, but does excel at laying garden drip lines, making taco pizza, remodeling the laundry, and taking baby and dog for a long run or walk each day.

….So I was pretty shocked when daughter told me about even asking him! Thank goodness, she asked me next, and we could quickly get it done while he was out of town, since he would not enjoy watching this. Whew!

Even my daughter, with excellent taste and a good eye, was intimidated by how to do this arrangement. How to start? And to be honest, it is more complicated than arranging the towels. I said “Honey, very few people would be comfortable doing this job” Even most artists would not jump at the task. I happen to have both the skill set and much experience in curating art shows. I have climbed up and down many a step stool while holding a hammer.

Right away I suggested that a large piece was going to be needed – one as big as the TV. Something reasonable and awesome was found and ordered in no time. I collected all the possible contenders of artwork in the house for the wall. It would look better if a couple frames were changed. There would be several things in common to make it work. I settled on subject matter of people and animals and two abstract. Two were line drawings, many were black and white, and two had large blocks of blue.

In order to really hang the art I would need a fill in substitute for the large piece not yet there. I bought a poster frame 24 X 36, and using a sharpie, fashioned a quick cartoon version of the blue tree ring piece (of that size) that had been ordered. The largest and second largest pieces were decided first for placement. Smaller artwork was filled in to complete the wall. Nothing to it.

My daughter commented on how long it takes. Much of the time is spent visualizing this or that – here or there. Thinking. Adjustments need to be made, so one can not be timid about moving a nail a bit over. Is that necessary? Yes, because it will look better.

On return of handsome skeptical husband, he said, “It looks OK, except for that one.” He pointed to the cartoon sharpie piece!  Ha Ha. Good eye. 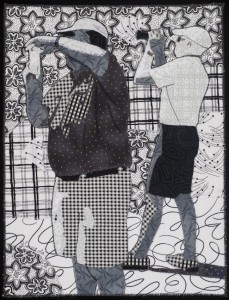 Recipe for Mexican Lentils: Soak 1 1/2 cups dry lentils in water (salt added) for 4 hours. Drain, wash, and drain. Put lentils in pot with 4 cups water, 1/2 bell pepper chopped, 1/4 cup raisens, 2 cloves chopped garlic, 1 t. each chili powder and cumin (or more), and 1/2 t. dried basil. Bring to a boil, turn down and simmer for 45 minutes. Add one 6 oz. can of tomato paste. Stir well and heat for a few minutes more. Serve with a dolop of sour cream or yogurt. 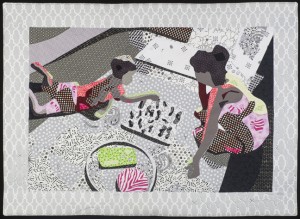 « Seasons of Life
Using again in a new way »