There is often a mystery around abstract artwork. What was the artist saying and why? How is it done?

When starting an abstract conceptual piece of artwork, sometimes the idea is a small one that is born out of a combination of fabrics that suggest something. Many Fires Burning is such a piece. I had painted some fabrics, and when they were laid out for examination afterwords, they reminded me of fire. We were experiencing a smoky Wyoming summer at the time ( five states in the region burning), and my feelings of discomfort about that made it into the artwork.

Other artwork comes about after thinking about a theme, such as metamorphosis. By writting down colors and descriptive words in my journal, the possibilities are narrowed down to managable units. Here are journal ideas: circular life cycle of butterfly – egg, caterpillar, chrysalis, butterfly, and egg. Also the continuous story of germination, birth, growth, web of life interactions, death, decay, explosion of life in soil, and new sprout. This Ongoing was created for the SAQA metamorphosis show. 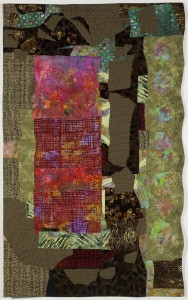 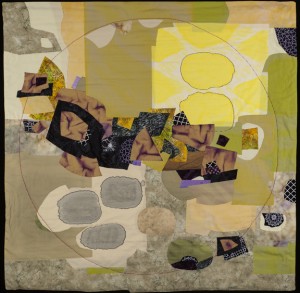 Wisdom of Ancient Ones began with the red and black fabrics. These made me think of fire inside a cave in winter. Those ancient humans sit around the fire to stay warm. Because they are in tune with seasons, they know that after so many moons, spring will come again.That’s why the colors of spring are present also.

Communion was the first piece in my wishful healing series, where I ask myself the question, “What does it take for a family/community/nation/world to heal?” Titles of pieces include – Being Kind, Responsibility, Consensus, Seen and Heard, Give and Take, Common Ground, Syncopated Dialogue, and Faith. All the artwork in this series contains purple (spirit) brown (earth) and chartruse (growth). Most of the pieces are abstract. For Communion, I made two simple shapes work well together.

Artists respond to the times in which they live. My digital technology series and my wishful healing series are examples of this. My newest conceptual artwork is very political. I had a lot of ideas! My challenge as an artist, was to get across the central idea of disruption, without it looking like too many pizza toppings or throw up!  How do I create a non chaotic piece that is about chaos? Yikes.

Above all, I want to create excellent artwork. I would use the nuetral colors of black,white, brown, grey – along with a lot of orange. Accent colors would be yellow, bluegreen-grey, and shinny foil. 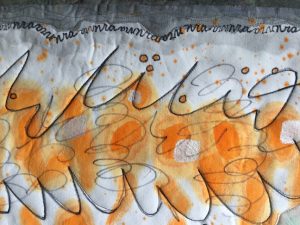 In my journal I wrote a list of descriptive words: erosion, disruption, off kilter, false, selfish, denial, no friends, alone, muddy waters, churned up, noisy, loud, shinny objects, tweet storms, harmful attack. (Not all of these ideas made it into the final piece.) I practiced drawing the churned up scribble that would represent disruption. After many versions, I settled on the logo I would use to represent the president. I figured out a way to create a tweet storm. 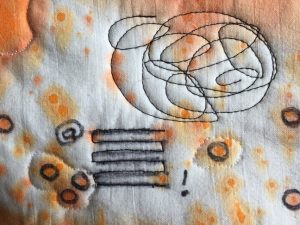 I began the work by painting large orange on white fabric with Seta Color. One panel is straight orange and the other has some yellow added. These panels look good together without being the same. I decided on a size, and cut 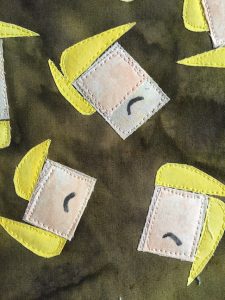 out the muslin that would be the backing support for fusing.  I intentionally made the sides of the shape swoop a little to represent being off kilter. I prepared all the fabrics with fusible web. The two orange panels were placed first. I liked the large scale of these sections. The repeating logo of president is the next thing that is noticed, because of the use of repetition and color contrast. I had saved the two round printed fabrics for years, and finally got to use them. They suggest a toxic world. The other bluegreen-grey fabric was selected to repeat the world colors. 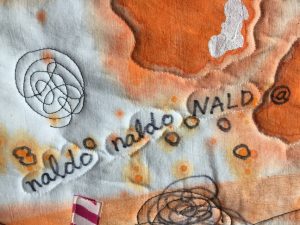 Smaller scale subtle details reward the viewer who sees the artwork at close range.  These things include a repeating line of NRA, seen in lower case cursive writing both right side up and upside down, as well as the words “smells fishy”. There is a different order of the letters in the word democracy — Mocra Cyde, and a different order of letters in the words ‘donald’ and ‘putin’ — naldo naldo NALD @ tinpu tinpu TIN. I have also included the words “way too many old white men”.

The most subtle words in this artwork are well hidden in the grey areas: disolve, destabilize, destroy, destruction, dismantle, dishonest, disintegrate, dismal, dismiss, disorient, disparity, disposable, distract, distort, divide, disturb. I very seldom use words in my artwork. The words in this piece are important, but I did not want them to over power the more important ideas of disruption and attack. For a while my working title for the piece was “The Amazing Horrible Dismantle Disruption”. 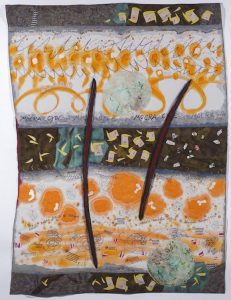 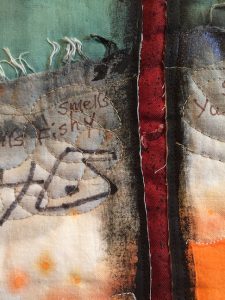 The two big slash marks are the first thing the viewer sees! And this is how it should be! The concept of being stabbed with a knife, and how I would create these marks (using reverse applique), was in my head, early in the process. The title now is Democracy Under Attack.

And now, something more pleasant. Recipe for one pot veggie enchilada: Saute eggplant and/or zucchini or crook neck squash, bell pepper, fresh basil, garlic, and parsely in sunflower oil. Simmer (covered) long enough for eggplant to cook well. Add tomato sauce and cumin and stir. Add cut up or torn corn tortillas. (Use plenty of tomato sauce, because it will be absorbed by tortillas.) On top of this add generous amount of sharp cheddar cheese to cover entire surface. Return lid and simmer for several minutes until cheese is melted. Remove from heat and uncover. Let sit and cool for 10 minutes before cutting and serving. Top with yogurt or sour cream if desired.

One Response to Conceptual Art

Joan nice article on your thoughts on abstract art and what is behind your pieces.

« How is it done?
Inspiration Found in Relationships »